Walking home from school, Kidan waved bye to Crabby. As she turned to walk down her road to go home, she suddenly realized her pendant felt warm against her throat. She thought she was imagining it, but it got warmer and warmer until it was really quite hot. She was thinking about

taking it off when she remembered Oshu’s warning, so she just held it away from her throat.

Why would it start to heat up and how? she thought to herself.

As she continued walking she heard shouting and banging noises, like bins being knocked over. As she approached the entrance to the alley that she always walked past, she saw two men dressed in black from head to toe, even their faces were covered. They had the smallest of slits for their eyes. She looked more closely and realized what was happening. These two men were kicking someone lying on the floor. Kidan’s first reaction was to just walk past. She has always been told to be careful and only use karate as self-defense. But surely this is self defense, how could she walk past when someone else needs help? Her decision was made as quickly as that. She started to run down the alley. Her pendant was now so hot the pain was stopping her from thinking straight. She noticed now that the two men were using a form of karate with which she was not completely familiar. Then, to her horror, she saw who was on the floor.

With a split lip, bruised eyes, and droplets of blood trickling down his face, Zan was peering past his attackers to see his sister running up to help. Kidan’s anger was as hot as her pendant. Without too much thought, she turned the sun between her fingers and everything went black. She saw her grandfather with the tiger again in the flash of light, and then he was gone. Kidan was now ready to stop the attackers. She launched herself at the first and nearest man with a flying kick. Her right leg held out and her left leg used for leverage, she completely missed him. She flew straight past him so fast she couldn’t believe what was happening. Her right leg made contact with the wall behind him and she propelled herself upwards and backwards. She flew backwards silently through the air, somersaulting as she went and landed in a perfect immovable stance right behind the stunned man. Quickly, she controlled her breathing and pushed her breath out hard and loud. She shouted as she chopped him at the side of his neck with a perfectly executed knife hand strike. Completely shocked by the somersaulting youngster and stunned by the hard strike from the side of Kidan’s hand, he started to fall to the floor, but as he did so, she pulled him around to face her. She grabbed his shoulders hard and pulled him down. As his head and upper body came downward, Kidan brought her left knee up sharply. She heard a terrible crunching sound as her knee collided with his nose, as he fell to the floor in a crumpled heap. Kidan spun around to face the other man, ready to attack, taking her immoveable stance once again, only to find him laughing.

“Now we know for sure, little one” he sneered.

With a small puff of green fog, he disappeared.

The trilogy begins!  Check out the fantastic concept video at  www.gltroubridge.weebly.com 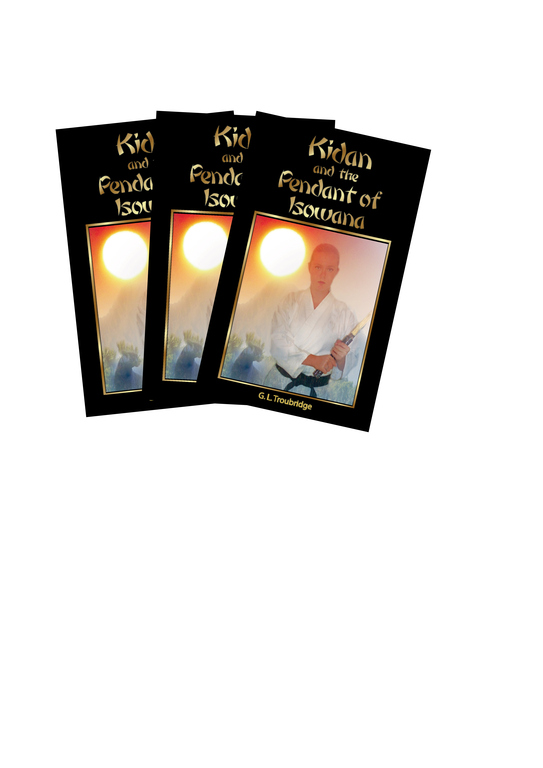